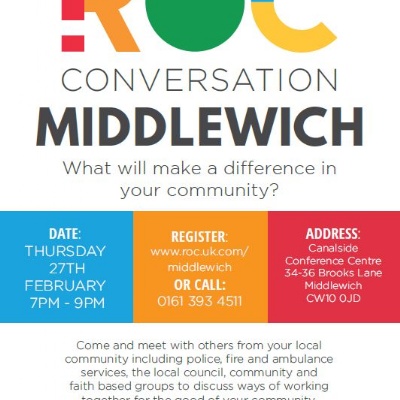 On Thursday 27th February 2020 a group of 6 students attended the evening meeting of ROC conversation (Restoring Our Communities) in Middlewich. The aim of the meeting was to find ways to improve the community, and give people the opportunity to share their thoughts on improvements they think could be made. The meeting was attended by over 100 people. These included the police, ambulance, church members, business owners, people in the education environment and many more. It was also attended by local politician, Fiona Bruce. Over the course of the night it gave us the chance to talk and find out about members of the community.

We took part in many activities, the first being where we wrote down things in Middlewich that we really like on post-it notes. The students then collected these and placed them onto a poster. The suggestions were things like local cafes, the clean team, Middlewich round table and sports clubs. It was really interesting to see the different perspectives of people around town.

The second task we had was with yellow and green luggage labels. On the yellow labels we wrote down things that we needed. Things like pool tables and volunteers were mentioned. On the green ones we matched up with things we had and could donate so someone could write down a pool table and a contact number. Later that night the ROC workers would match them up and let people know.

The next thing that happened were some interviews. Mr Wiseman and the 6 students were called up to the front. The woman in charge asked us a few questions like what do you like about Middlewich? How do you think we can improve it? How can we help to get teens off of the street to make the Police’s job easier?

The final activity that we took part in was that we were told to write down 6 of our suggestions on sheets that they provided us with and then ways that we thought that we could achieve them. Our suggestions were:

We were then asked to choose one suggestion and share the idea with the rest of the people at the ROC conversation. Daniel and I went up and chose the PCSO sheet. We were told that it was a fabulous idea and would be really beneficial to the school and the Police.

Overall, I think that this was a really great experience and an amazing chance to speak with other people in the community.