There has been a settlement at Middlewich since at least the time of the Roman occupation. As a wich town, Middlewich is an important centre for the extraction of salt; in earlier years it was also known for its production of Cheshire cheese, silk, and its agriculture. In the present day it is known for its canals, its heritage events and its festivals.

In the Domesday Book Middlewich is spelt "Mildestvich"; the termination wic or wyc in Old English refers to a settlement, village or dwelling. It is also supposed that "wich" or "wych" refers to a salt town, with Middlewich being the middle town between Northwich and Nantwich. 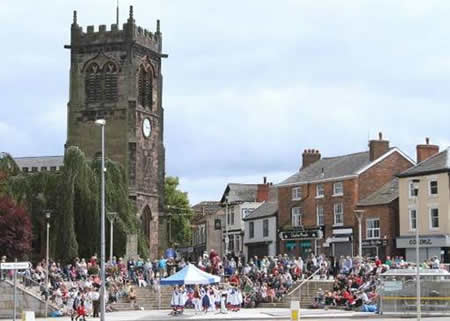 Middlewich was founded by the Romans, who gave it the name Salinae because of its surrounding salt deposits. It became one of the major Roman sites for salt production, an activity that was centred on the township of Kinderton, about a quarter of a mile north of the present-day parish church of St. Michael and All Angels. It has been suggested that pre-Roman salt production also occurred in the same area, but there is no supporting archaeological evidence. Whittaker's History of Manchester claims that the Iron Age Cornovii made Kinderton their capital, but it is more likely that the Cornovii inhabited Kinderton for its salt-making potential. There was once thought to have been a medieval castle at Kinderton, but that is now thought to have been unlikely. 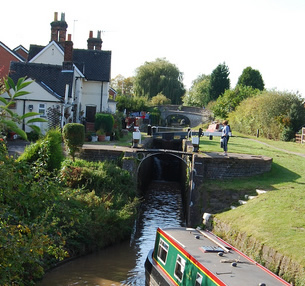 Middlewich lies across the King Street fault, which roughly follows the Roman road, King Street, from Northwich to Middlewich. During their occupation the Romans built a fort at Harbutts Field (grid reference SJ70216696), and excavations to the south of the fort have found further evidence of Roman activity including a well and part of a preserved Roman road. An excavation in 2004, in Buckley's Field, also uncovered signs of Roman occupation.

Salt manufacture has remained the principal industry for the past 2,000 years, and it has shaped the town's history and geography. Before the Norman invasion of England in 1066, there is thought to have been one brine pit in Middlewich, between the River Croco and the current Lewin Street. In the Domesday Book the area is described as being "wasted", having been cleared by King William around 1070 as an "act of rage against his rebellious barons". Gilbert de Venables became the first Baron of Kinderton shortly after the Norman Conquest, the title being conferred by Hugh Lupus. A manor house was built to the east of the town and became the baronial seat of the Venables family. A Jacobean screen in the church of St Michael and All Angels has the carved Venables coat of arms. The title "Baron of Kinderton" is now vested in the Lord Vernon.

On 13 March 1643 the town was the scene of the first Battle of Middlewich, between the Parliamentarians, under Sir William Brereton, and the Royalist supporters of King Charles I of England, under Sir Thomas Aston. The second Battle of Middlewich took place on 26 December 1643, and claimed the lives of about 200 Parliamentarians, along with a number of Royalists under the command of Lord Byron. 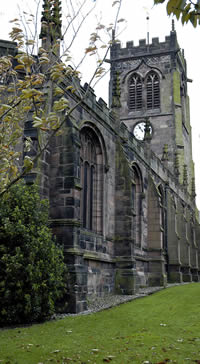 The parish church of St. Michael and All Angels dates back to the 12th century.

Middlewich lies on the confluence of three rivers: the Dane, Croco and Wheelock. Three canals also pass through the town, the Shropshire Union, Trent and Mersey, and the Wardle canal, as well as three major roads, the A533, A54 and A530.

Middlewich also has good motorway links to the nearby cities of Manchester and Liverpool.

The town's population has doubled since 1970 despite a reduction in the number of manufacturing jobs in salt and textile manufacturing, suggesting that many of the new residents live in Middlewich for reasons other than local employment.

Since 1990 there have been initiatives to increase the volume of tourism into the town, through events such as the annual folk and boat festival, the Roman and Norman Festivals, and regular farmers' markets.

In January 1906 work began on the building of a new school on King Edward Street. On 1st November 1906 the new school opened, and so on 1st November 2006 we celebrated 100 years of education on the current site. The school in 1906 provided learning for about 600 boys and girls aged 7-14.

The first Headteacher was Mr Frank Lidbury. The buildings and the size of the school have changed considerably since then, although a large part of the original structure remains. The school today is an 11-16 mixed comprehensive with approximately 700 pupils on roll. 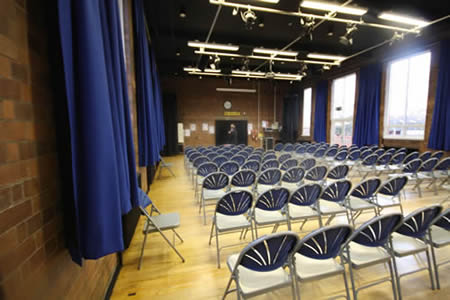 I am proud to be the most recent holder of the post of Headteacher at the school. I have been keen to maintain the traditions of the past whilst seeking to develop the school in order to meet the challenges of preparing our pupils to lead fruitful and useful lives as members of their community.

The school has a long history of providing an excellent education for the young people of the surrounding area. We firmly believe in “Achievement for All”, where “each individual is valued and achieves success within a caring community”. We are extremely proud of our pupils and their achievements.

We are constantly, however, looking to improve and adapt to meet fresh challenges.